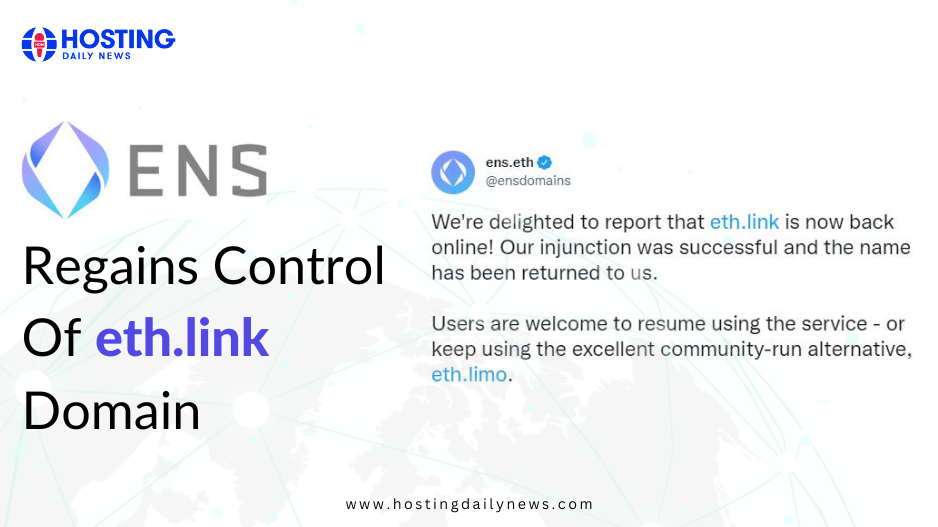 In A Dispute Against GoDaddy, Ethereum Name Service Regains Control Of The Eth.Link Domain

Virgil Griffith and the firm behind the Web3 domain service sued GoDaddy earlier this month, saying that the domain registration platform erroneously stated eth.link had expired and then sold it to a third party.

The website for the Ethereum Name Service (ENS), which is behind all web addresses that end with .eth used across the Ethereum community, is back online after losing its domain name eth.link to a third party earlier this year.

Eth.link served as an important bridge, allowing people without Web3-enabled internet browsers to access.eth addresses. As of August 17, ENS has around two million domain name registrations.

True Names Ltd., the company that created ENS, sued GoDaddy in early September, alleging that the domain registration platform incorrectly informed eth.link users that the address registration had expired and that GoDaddy later sold the domain rights to a Web3 start-up before they were supposed to be available for repurchase.


“We are pleased with the court’s decision and are happy users can now resume using eth.link without disruption,” said Nick Johnson, founder of ENS, in an email to CoinDesk.


According to the complaint, the domain was then sold to Web3 company Manifold Finance on September 3, two days before it was supposed to go on sale again. To make matters worse, Virgil Griffith, the person with the authority to renew eth.link’s registration, is serving a five-year jail term for lecturing about sanctions evasion via crypto at a conference in North Korea.

Plaintiffs True Names and Griffith requested $75,000 in damages, excluding legal fees, as well as a temporary restraining order against GoDaddy in their complaint.

The website, eth.link, is back live as of Monday, and the address is now registered with another domain registrar Dynadot LLC, according to GoDaddy data, and is supposed to expire in July 2023.

No comments to show.